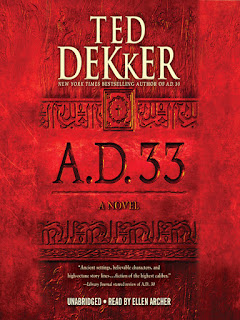 Synopsis:
They call her the Queen of the Outcasts. Maviah, a woman whose fate was sealed on her birth by this world - unwanted, illegitimate, female, a slave - subject to the whims of all. But then she met a man named Yeshua who opened her eyes. She found strength in his words, peace from the brutal world around her. Because of what he taught her, she has gathered her own travelling kingdom of outcasts deep in the desert, wielding an authority few have seen. But when her growing power threatens the rulers around her, they set out to crush all she loves, leaving her reeling as a slave once more. She must find Yeshua to save her people, but when she does, she will be horrified to discover that he faces his own death.
Enter a story full of intrigue, heart-wrenching defeat, uncompromising love, and staggering victory - one that reexamines everything you thought you knew about the heart of Jesus' stunning message and the power that follows for those who follow his easily forgotten way.

The story was interesting enough to keep me listening, Ellen Archer is a great narrator, and I was keen to see how contact with Yeshua played out in the lives of the central characters from book one.
** spoiler 1:  My hunch about Judah not being the best match for Maviah paid off - life circumstances became a 'rip off' for him :-(  and his character didn't grow in strength but into bitterness and revenge.
** spoiler 2:  Dekker leads us straight to the beginning, at the end of the book, of the era of Christian martyrs.  I thought the author was setting us up, and, was resigned to the thought that he was going to have Talya, Saba, or Maviah give their life in that arena.

I think what let the story part down for me were the preaching chapters towards the end of the book (I enjoy a good sermon - just not inside my historical fiction read where the author has tried to disguise their lengthy sermonising into the guise of supposed storytelling dialogue between the characters).  Added to that, Dekkers portrayal of how he thought Christ acted after his resurrection was a bit of stretch for me.  One example is where the author had him winking at people -  like in scriptures where he that "winketh with his eye/s" is a seriously bad action.

PS: I wonder if Dekker's editor noticed the overuse of the word thundering?
By Chelle at March 09, 2019