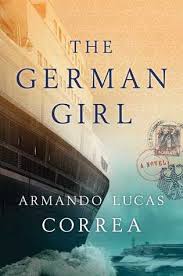 (2.5)   Biographical Fiction, parallel stories 1939 & 2014
The book has been translated from Spanish and I wonder if that accounts for the slightly simplistic tone (language level could easily be read by a grade schooler) and one-dimensional storytelling?  The historical subject was of interest to me so I  read on: it's to be noted though, this book focuses more on life in Cuba for German Jews, post-1939, than on their story on the St. Louis.   ﻿
Despite the slap-in-your-face introduction, Hannah is contemplating parricide, the book felt lacking in any form of suspense-filled storytelling, The German Girl ended up zeroing in on coming of age romances; however, if anyone was wanting a lighter retelling of this event in history, which I know ended horribly for those on the St. Louis, then this might count.

One of the main characters conducts an affair – referred to (semi) euphemistically.
After losing her husband in 9/11, Twin Towers, one of the mothers in the story suffers from chronic depression, and the daughter basically becomes the 'carer' for a while. (Near the end of the book the mum eventually comes out of her depression.)
There is mention of suicide: WWII German Jews secreting cyanide tablets away to be 'used' if needed.  Before Hannah's family 'left' Germany her mother was definitely suicidal; hence Hannah wondering if she would have to kill her parents as they didn't seem 'brave' enough to do it.
The author shines the spotlight on a 13-year-old girl receiving her first kiss, and how important it was.
Understandably, due to the era, topics, and, setting of this book, Correa seems to focus on death, and, the characters in this book being able to choose the time when they want to die - by just giving up the will to live - which is how the book ends.
By Chelle at June 09, 2018

Email ThisBlogThis!Share to TwitterShare to FacebookShare to Pinterest
Labels: 2018, 52 books in 52 weeks