Sweep: The Story of a Girl and Her Monster ~ Jonathan Auxier 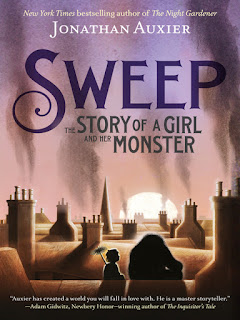 (5)   Juvenile Fiction (epukapuka)
Blurb:  For nearly a century, Victorian London relied on "climbing boys"—orphans owned by chimney sweeps—to clean flues and protect homes from fire. The work was hard, thankless, and brutally dangerous. Eleven-year-old Nan Sparrow is quite possibly the best climber who ever lived—and a girl. With her wits and will, she's managed to beat the deadly odds time and time again. But when Nan gets stuck in a deadly chimney fire, she fears her time has come. Instead, she wakes to find herself in an abandoned attic. And she is not alone. Huddled in the corner is a mysterious creature—a golem—made from ash and coal. This is the creature that saved her from the fire.

Sweep is the story of a girl and her monster. Together, these two outcasts carve out a life—saving one another in the process.  By one of today's most powerful storytellers, Sweep is a heartrending adventure about the everlasting gifts of friendship and hope.

If I had younger children I would be sharing this with them as a read-aloud!  A clever, beautiful, poignant story about love and loss,  which was woven amongst the dark tapestry of chimney sweeps lives in Victorian London.
The historical aspect of this book is good,  laying out the divide between the social classes, especially for the children,  and the struggle the Jewish immigrant had in Victorian Britian.   I loved Auxier’s soot golem, Charlie – he’s so loveable, and the inclusion of the Jewish history surrounding a golem.  The background of some of the Jewish observance (religious/celebration) days is also included for those not familiar with the history concerning them.  It's nice to see Auxier give William Blake's poetry (including The Chimney Sweeper) an airing too.
Don’t be tempted to skip the endnotes, they add an extra layer to this work of art by Jonathan Auxier.

Possible triggers for those with sensitive young readers: the death of parents, and, a child,  another child is sold by his parents to a sweep, sacrificial love (giving one’s life to save/protect a loved one) – Auxier touts it as, paraphrasing,  by saving others we save ourselves.)
By Chelle at February 07, 2019