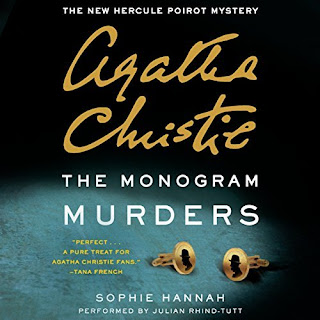 Excellent narrator.  Julian made this book worth listening to!
I’m pleased I went into this audiobook with the mindset that this story included a “Poirot” and was not written by Agatha Christie, otherwise I would have been seriously disappointed.
I thought the audiobook was an amazing listen, with just an okay storyline: and, is not a title that I would recommend to my friends and family..... well, unless you go with the audiobook.

The story leans heavily on the younger, very un-Christie like, Scotland Yard ‘tec, Edward Catchpole.
There are telling variances highlighting the fact that Ms Hannah is, understandably, an author influenced by a more modern culture than the one Christie lived in, and, wrote about.  Sophie Hannah’s viewpoints on Church and Christianity seem vastly different to Christie’s; and, Agatha Christie would never have had one of her central ‘good characters’  justifying that any “love” relationship, even adultery, is alright when two people love each other … “how can love between two people be wrong?”.
Nor would Christie have had Poirot so loquacious during the summation of the case.
Like I said, not Agatha Christie.

As an aside:  I felt a bit sorry for the minister in this story - Sophie Hannah set him up as someone that was easy for me to dislike - he has 3 women panting after him, one of which the author has him negating his marriage vows to indulge in an adulterous affair with.  His poor wife!  For me, he came across as weak where it really mattered and then showcased him as supposedly having strength where it didn’t matter: here is a man who would repeatedly cheat on his sweet, kind, loving wife and yet thought it honourable to protect an embittered, narcissistic, woman intent on revenge.